Well Christmas is well and truly over for another year, not sure about you but I’ve already managed to break several of my New Year resolutions but despite the dark evenings I do love this time of year. Lots of chunky soups, comforting stews, steamed puddings and the smell of Seville orange marmalade bubbling in the pot. The bitter oranges are in the shops now, so rush out to buy more than you think you need, freeze some and use my Whole Orange Marmalade recipe (see Examiner website), whenever you are running out of Seville orange marmalade during the year.
Meanwhile how about some fresh new ideas to liven up your cooking for 2019. Here are some of my favorite new cookbooks to use up your Christmas book tokens:

1.    The Noma Guide to Fermentation by René Redzepi and David Zilber
2.    Ottolenghi Simple: A Cookbook by Yotam Ottolenghi
3.    Extebarri by Jon Sarabia and Juan Pablo Cardenal
4.    Ethiopia: Recipes and Traditions from the Horn of Africa by Yohanis Gebreyesus
5.    Zaitoun: Recipes and Stories from the Palestinian Kitchen by Yasmin Khan
6.    Jamie Cooks Italy by Jamie Oliver
7.    Venice: Four Seasons of Home Cooking by Russell Norman
8.    Copenhagen Food: Stories, Traditions and Recipes by Trina Hahnemann
9.    How to Eat A Peach by Diana Henry
10.   Cook, Share, Eat, Vegan: Delicious Plant-based Recipes for Everyone by Áine Carlin

It may not be to everyone’s taste but my book of the year is the Noma Guide to Fermentation by René Redzepi and David Zilber. Few chefs know or understand how to use fermented foods to their full potential like René does. For several years now, David Zilber, Arielle Johnston and Lars Williams have been experimenting and perfecting all manner of fermented foods in their bunker turned fermentation lab beside Noma in Copenhagen, and have gone where few others have dared to venture. For those of us who have been experimenting over the years this book is the master class Penny, Marie and all of us in the ‘Bubble Shed’ at Ballymaloe Cookery School have been eagerly anticipating.

Yotam Ottolenghi’s new book, Ottolenghi Simple: A Cookbook, has taken the US by storm as well as this side of the world. Israeli born Yotam, author of Jerusalem and Plenty already has quite the following for his take on his beloved Middle Eastern food. However, he is not known for simple recipes so in the nick of time, before people get too exasperated, he’s published this volume of enticing dishes, many with fewer than 10 ingredients – and several that take less than 30 minutes to get on to the table. Love this book of quick and everyday recipes from one of the most creative chefs on the current food scene.


Ethiopia: Recipes and Traditions from the Horn of Africa by Yohanis Gebreyesus. Always fascinating to learn about the food of an area that is totally unfamiliar, so I was intrigued to find this book published by Kyle Books. I first tasted Ethiopian food in Santa Fe in California and later ate Teff, the fermented flat bread from a stall in Union Square Market in lower Manhattan. Ethiopia, a fascinating country that has never been colonized but it’s intriguing cuisine is enriched with the different religious influences of Christianity, Judaism and Islam, a combination unique to Africa. Chef Yohanis Gebreyesus, takes us on a journey of the essential Ethiopian dishes, interwoven with enchanting stories of local people and customs. He whetted my appetite not only for the food but for the country – must visit soon…

For a taste of Ethiopia here in East Cork, rush to Fizzy’s stall at the Mahon Point and Midleton Farmers Market. She also sells the quintessential Berber spice mixture that you’ll need for many of the dishes.

Trina Hahnemann’s name is not nearly as well known as René Redzepi but in her own way she is a much loved and highly respected ambassador for Scandinavian food. Trina has written ten best selling cookbooks full of gorgeous simple recipes. She is an enthusiastic advocate for sustainable solutions, organic sourcing, and food cooked with love. Copenhagen Food is a love letter to her native Copenhagen and the delicious dishes enjoyed from her home town.


Of the new vegan cook books published in 2018, of which there were many here are a few worth a mention: Cook, Share, Eat, Vegan: Delicious Plant-based Recipes for Everyone by Áine Carlin; Veganish by Holly White. The runaway best seller is by The Bosh Boys, Bosh! Simple Recipes, Amazing Food, All Plants. And finally 15 Minute Vegan Comfort Food by Katy Beskow.


Jam makers should definitely seek out 5 Seasons of Jam by Lillie O’Brien of the London Borough of Jam and last but not least a shout out to some Irish titles, Currabinny Cookbook by James Kavanagh and William Murray (alumni of Ballymaloe Cookery School) which recently won the Irish Cookbook of the Year, Donal Skehan’s Meals in Minutes, Neven Maguire’s new book Home Economics for Life, Irish Seaweed Christmas Kitchen by Prannie Rhatigan one of the pioneers who highlighted the magic of seaweed long before it became trendy. There are many more but I am out of space however, I can’t forget How to Eat a Peach: Menus, Stories and Places by Diana Henry – certainly one of the great books of the year. 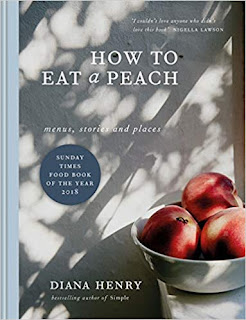