How About Some Cake?

How about a delicious homemade cake to cheer us all up?

Who doesn’t love a slice of delicious cake and a cup of tea, even while we need to observe strict social distancing. Recently, I met a lady who confided that she had never made a cake in her entire life…she had absolutely no idea where to start, it was a complete mystery to her.

She was over the moon with delight when she baked her very first cake while she as with us here at the Ballymaloe Cookery School for a class. We showed her just how easy it was to make a super delicious cake when you follow a good recipe. You can’t imagine how thrilled she was, lots of photos, beaming smiles and such a sense of achievement. 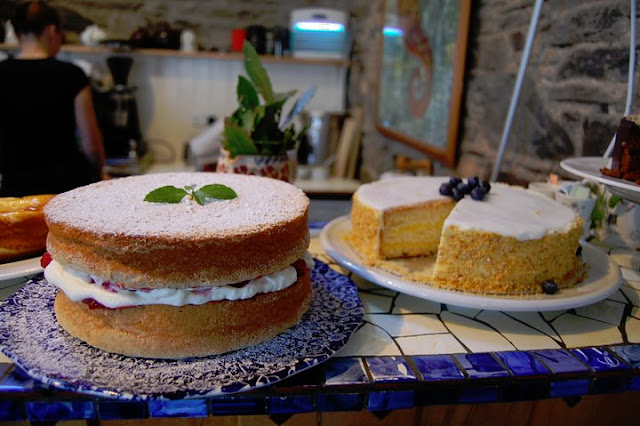 A few little tips to get started:

1. A couple of spatulas and a wooden spoon.

2. A wire rack to cool the cake when it comes out of the tin.

3. A palette knife is useful for icing but not essential.

4. Buy an accurate scales, baking is an exact science, so weigh all the ingredients meticulously

5. The finest ingredients make the best cakes, use butter, fresh free range eggs and pure vanilla extract rather than essence which was never ‘next or near’ a vanilla pod in it’s life!

For memorable cakes use chocolate or unsweetened cocoa.

Being pernickity about the quality of the ingredients will really pay dividends and result in something really gorgeous. After all, if you go to the effort of making a cake, it might as well be super delicious! 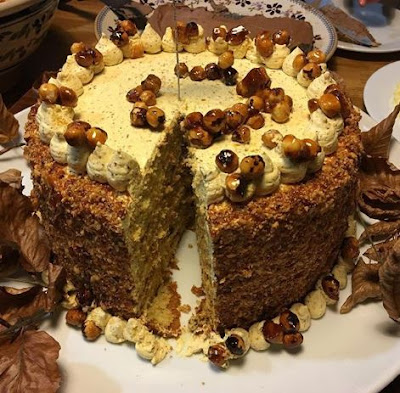 6. Choose a really good recipe from a trusted source, sounds odd but sadly not all recipes are as carefully tested as they ought to be. Then inexperienced bakers blame themselves rather than the recipe and come to the conclusion that they can’t cook.

7. Equip yourself with some basic equipment and utensils:

8. A food mixer is an advantage but certainly not essential but it does make the job much easier.

9. Equally a food processor is worth the investment and means a cake can be made in mere minutes.

10. A piping bag and a couple of nozzles if you want to get creative.

These few items will get you started – you can add to your baking kit as you go along.

Here is a tried and tested recipes for one of my favourite cakes. 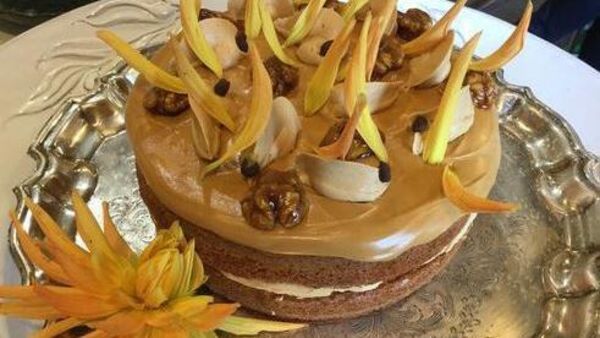 This is a splendid recipe for an old-fashioned coffee cake – the sort Mummy made…We still make it regularly and everyone loves it. I’m a real purist about using extract rather than essence in the case of vanilla, but in this cake, I prefer to use coffee essence (which is actually mostly chicory) to real coffee. I’ve used a square tin here but one could use 2 round tins.

Line the base and sides of the tin with greaseproof or silicone paper. Brush the bottom and sides with melted butter and dust lightly with flour.

Beat the soft butter with a wooden spoon, add the caster sugar and beat until pale in colour and light in texture. Whisk the eggs. Add to the mixture, bit by bit, beating well between each addition.

Sieve the flour with the baking powder and stir gently into the cake mixture. Finally, add in the coffee essence and mix thoroughly.

Spoon the mixture evenly into the prepared tin and bake for 40-45 minutes. When the cake is cooked, the centre will be firm and springy and the edges will have shrunk from the sides of the tin. Leave to rest in the tin for a few minutes before turning out onto a wire rack. Remove the greaseproof paper from the base, then flip over so the top of the cake doesn’t get marked by the wire rack. Leave the cake to cool on the wire rack.

To make the coffee butter cream, whisk the butter with the sieved icing sugar and add the coffee essence. Continue to whisk until light and fluffy.

When cold, cut the cake in half lengthwise, then cut each half horizontally creating rectangular layers, 4 in total. Sandwich each sponge layer together with ½ of the coffee butter cream, forming a loaf shaped cake. Place half of the remaining buttercream into a piping bag, fitted with a medium star shaped nozzle. Spread the sides and top of the cake thinly with the last of the butter cream and place into the fridge for 10-15 minutes to chill. This technique is called crumb coating.

Next make the Coffee Glace Icing. Sieve the icing sugar and put into a bowl. Add coffee essence and enough boiling water to make it the consistency of a thick cream (careful not to add too much water)

Remove the cake from the fridge. Pour the glace icing evenly over the top of the cake, gently spreading it down the sides with a palette knife. Allow to set, 30 minutes (approx.). Decorate with piped rosettes of buttercream and garnish with the caramelized walnuts.

Dissolve the sugar in the cold water over a gentle heat. Stir until all the sugar has dissolved, then remove the spoon and continue to simmer until the syrup caramelises to a chestnut colour. Remove from the heat, dip the walnuts into the hot caramel, and coat each one completely using a fork. Remove to a silicone baking mat, or oiled cake tin, and allow to cool. Once all the walnuts have been coated, Pour the hot water into the saucepan and continue to cook until the caramel dissolves and the sauce is quite smooth. Reduce until it starts to thicken slightly. Allow to get cold. This sauce can be used for serving with ice-cream.
Posted by Darina at 15:34

The Wonder of Oats

October 10th is World Porridge Day, a good opportunity to remind ourselves of this inexpensive super food which comes to us in many variations – it’s basically one of the great convenience foods of the world.
Virtually every food writer and journalist who stays at Ballymaloe House raves about the porridge that they serve for breakfast with a generous drizzle of Jersey cream and a sprinkling of soft brown Barbados sugar. It’s not just any old porridge – it’s Macroom oatmeal, lovingly kiln roasted and milled by Donal Creedon at Walton’s Mill, the last surviving stone mill in Ireland. The mill has been in the same family since the 1700’s. Donal, the great, great, great, great grandson of founder, Richard Walton, carefully and respectfully carries on the tradition. 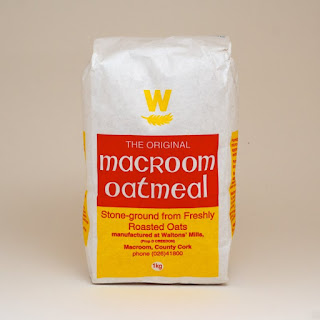 The porridge is sold in the same distinctive red, white and yellow bags – which is somehow reassuring. The oats are gently toasted for up to two days on cast iron plates to give the oatmeal the distinctive toasted flavour we all love.
Long gone are the days of gruel and watery porridge….. So if you are convinced oatmeal is just for breakfast – think again! The texture is deliciously chunky and packed with flavour. Steel cut or what many refer to as pinhead oatmeal, which takes considerably longer to cook. Jumbo rolled oats and ‘speedie cook’ rolled oats, are also delicious. Oatmeal is not just for breakfast porridge, biscuits and granola. It’s also brilliant in savoury dishes such as savoury porridge with greens. 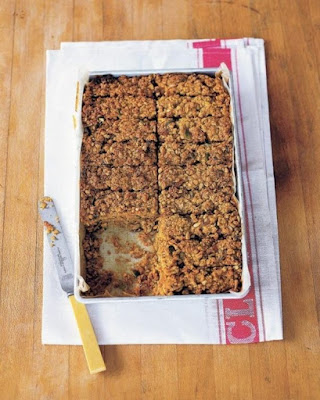 A past student Alex Hely-Hutchinson, opened a restaurant in London called 26 Grains. The 8 or 9 different types of porridge on their menu, both sweet and savoury have customers queuing every day. 26 Grains was probably inspired by GrØd, the porridge paradise in Copenhagen, opened in 2011 in a basement on Jaegerborggade, at that time a distinctively dodgy street with appealingly low rent. Now there are several branches and a GrØd cookbook. They were pretty much ‘skint’ when they opened but manged to afford to buy some oats to make bowls of hot steaming porridge – the rest is history…a huge success story! The menu now includes other comforting food like risotto, dahl and congee and there are now branches all over Denmark. 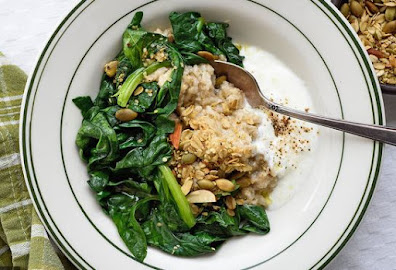 Oatmeal has a long and fascinating history. It has been grown in Ireland since medieval times, our humid, wet climate suits it. There are many historical references and a wealth of archaeological evidence. Oats were used in gruel, porridges, flatbreads and by all accounts, a not very good beer! The straw and chaff were used in the manufacture of floor covering, baskets, hen roosts and bedding – but back to the kitchen.

To use that much overused term, they are definitely a ‘super food’. Oats are packed with protein, high in soluble fibre, which helps to lower cholesterol and you’ll have noticed that you don’t feel like reaching for a donut at eleven if you have a bowl of porridge for breakfast. Apart from the fibre content which is good for your gut and helps to prevent constipation, it is super filling and satisfying and boosts our energy levels. Oats also contain a wide range of nutrients, vitamin E, essential fatty acids and if you are to believe all the research, helps to prevent cardiovascular disease by lowering your bad LDL cholesterol without affecting the good cholesterol. The high fibre and complex carbs help to stabilize the blood sugar according to the American Cancer Society. The lignans in oats helps to reduce hormone related cancers.
Up to relatively recently I was a Jersey cream and soft dark brown sugar devotee but I’ve become much more adventurous (led by my grandchildren and the Ballymaloe Cookery School students example). Think peanut butter and banana; walnuts, blueberries and maple syrup or honey, roast almonds, dates and almond butter (it’s all about what you sprinkle on top). Stewed apple or compote with cinnamon. I draw the line at white or dark chocolate chips but suspect that’s a generational thing.