In the US something very interesting is happening, it’s virtually a grass roots revolution. However, it’s not just in the US, in cities all over the world people seem to feel a deep need to produce food locally once again. It seems to be an international phenomenon - an eerie almost primeval reaction as if deep down people sense that there may be a shortage of food before too long.

In fact, rooftop farming including backyard chickens and rooftop apiaries are now a major international urban trend. From Detroit to Tokyo, Rotterdam to Hong Kong, Montreal to Brooklyn, there are urban farming projects. 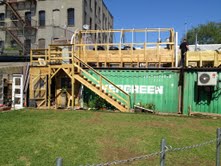 I first noticed the guerrilla garden movement on a visit to San Francisco about five years ago. Virtually every patch of waste ground or disused parking lot had been commandeered by eager gardeners who planted vegetables, herbs and salad leaves. Some shared their surplus with local shelters and sold the remainder from farm stands on the edge of the plot. 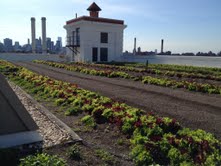 Since then I have visited numerous projects particularly in the US. From the Edible Schoolyard in Berkeley and the City Slicker Community Farms in Oakland California, to a two acre farm in the centre of Austin, Texas. Some projects are one man bands, others community based. 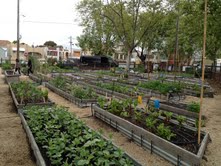 Recently, I went to New York to check out the urban farming movement. For the first time I began to get idea of the sheer scale, there are over 700 urban farms and gardens across New York City alone.

Last year, I visited Brooklyn Grange a two acre rooftop farm on top of a five story building on Northern Boulevard, New York, established in May 2010. 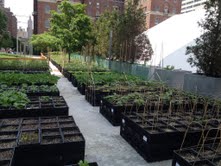 On a recent trip, I looked at a couple of other models, a branch of Brooklyn Grange at the Navy Yard, 65,000 square feet of vegetable beds on the top of an eleven story building. This project provides a livelihood for four people, employment for a further ten people and 30 apprentices plus a refugee training program. They sell their fresh produce from a farm stand outside the building and also have a CSA (Community Supported Agriculture) and make lots of jams, pickles, hot sauces and herb teas from the surpluses and gluts from the farm. 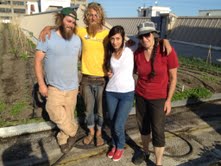 Anastasia Cole Plakias showed me around and explained how nowadays there is growing support at government level for initiatives that are helping to change the food system plus deliver environmental benefits. Hurricane Sandy really spooked New Yorkers particularly those in lower Manhattan and Brooklyn, some of whom were without power and water for over a week. So any initiative that contributes to storm water management (a buzz word) is welcomed and generously supported. Anastasia explained that the Navy Yard got a generous SARE (Sustainable Agriculture, Research and Education) grant from Mayor Bloomberg and Department of the Environmental Protection who see it as more efficient to invest in green roofs and infrastructure which creates jobs and has several extra benefits.

Roof top farms and green roofs not only utilise space that would otherwise be empty and unused but they absorb rain and storm water run-off that would eventually end up polluting the East River. They also absorb heat during the day and release it into the atmosphere at night plus decrease the heating and cooling needs of a building. The Nave Yard Project also links up with GrowNYC on a composting program. Local residents collect their organic waste which when composted enriches the fertility of the soil, which is the biggest challenge for rooftop farms.

The Edible Schoolyard started by Alice Waters in Berkeley in California now has a branch in Brooklyn which partners with schools to build gardens and kitchen classrooms where children can engage in hands-on learning. They aim to provide students with the knowledge and skills and environment required to healthier choices and change the way they eat for life.

Top chefs are also frantically growing their own produce and linking in with local projects but there is a whole other article in that of which more anon.