I'm sitting in a rattan chair on a balcony in Italy in the misty morning light overlooking the Aeolian sea. The birds are singing gustily in the lemon trees below. Somewhere in the distance church bells are ringing and I can hear the occasional shot from a hunter's gun.


I'm in Sicily, staying with friends in a beautiful villa in the shadow of Mount Etna. I'm having one of those rare moments of blissful contentment.

Last night we had a wonderful dinner which included both ricotta and wild green fritters, and a risotto with porcini mushrooms collected on the slopes of Mount Etna, as well as parmigiana and a local sausage made with pork and Parmesan in a Marsala and orange sauce. For pudding we had the most sublime crème caramel I've ever tasted, made by a past student Natalie to a recipe from one of the owners Marco Scire. He and Jon bought this villa in an advanced state of dereliction in 2006 and have since restored it to beyond its former glory. 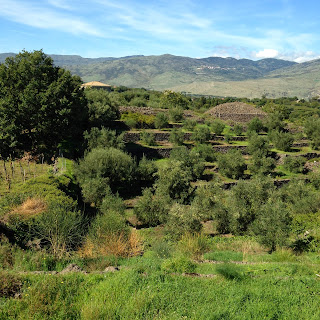 Later in the day we piled into the farm car and wound our way up through the Etna villages to a vineyard between the villages of Passopisciaro and Randazzo, owned by Alice Bonaccorsi and her husband Rosario. Because so many people nowadays can no longer drink the mass produced wines without a reaction, we have a particular interest in the natural wine movement. Etna wines in Sicily are really causing a stir, Jon and Marco are particularly knowledgeable on the subject and they've brought us to visit one of the small vineyards whose wine they really admire. this is possibly the most beautiful vineyard I've ever visited anywhere in the world. The indigenous vines, some over 80 years old are planted on tiered terraces held in place by loose lava rock walls. The soil in the vicinity of Etna is incredibly fertile and the biodiversity is startling. Here and there an ancient olive trees  laden with ripening fruit. There's a white mulberry and Spanish chestnut covered with prickly husks and an occasional walnut tree. Cerise coloured prickly pears are ripe for picking on the cactus and the pomegranate is also dripping with fruit: it feels like the Garden of Eden.

It's harvest time, the pickers are chatting away happily as they snip the last grapes from the Nerello Mascalese vines. The vineyard is alive with bird song and the rosemary and wild thyme are buzzing with bees. Alice points out the edible bitter greens as we walk along the ancient lava paths: wild fennel, sorrel, old lady legs, chickweed, and something called cannelli.  All these are a treasured part of the Sicilian diet, and are  incredibly nutritious, eaten wilted as a vegetable, with pasta, in fritters, sauces. They can be an acquired taste for those of us for whom bitter is not part of our flavor palette but I absolutely love them. 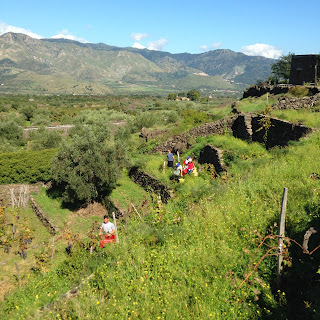 The Bonaccorsis keep a few sheep and goats to clean the vineyards after picking, no mown and manicured vineyards here but a reassuring feeling that they are really farming in harmony with nature, so rare nowadays. The Val Ceresa Etna wines from their small vineyard have already made their way onto the wine lists of some of the smartest restaurants in the world, as a growing public craves something other than the five or six favoured noble grape varieties. At last there more people are beginning to truly value authenticity, craft and tradition in wine-making.

Lunch at a little local restaurant in Randazzo, Trattoria San Georgio & Il Drago, opposite a twelfth century convent with lava rock window surrounds. The food was fantastically good and authentic. We had asked the owner to bring us something local, to which he replied, 'we only have local so how can I choose?' He then proceeded to bring dish after dish, first an anti pasta with about seven choices including cardoons, bitter greens, cured black pig ham, local cheese, zucchini and ricotta frittata, stuffed zucchini blossoms, roast purple cauliflower with chilli and olives. 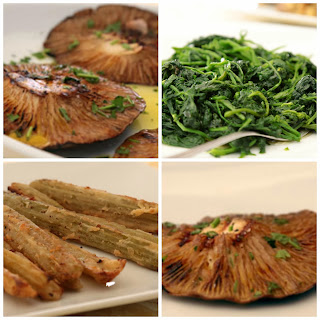 This was followed by tonnarelli pasta with briony and fungi di feila, local wild mushrooms roasted in the wood oven. None of us had room for pudding but there was fresh fruit and new season walnuts from their trees. It was a feast, and I kept wondering how Sicilian visitors would fare if they called in to a random restaurant in a remote village in Ireland!

The next day, we drove to Catania, a baroque city completely rebuilt in the 1600's after lava from Mount Etna engulfed the city to a depth of 15 to 20 meters. It was fascinating to see the remains of a Roman amphitheatre under one of the main squares.

This region had been the bread basket of Sicily. Up to the 1930's wine was shipped in cask from the port of Catania to France where it was blended with French wines.

We strolled through the old city admiring the elaborate facades and vaulted doorways. The shops have a charming old fashioned feel with goods displayed in little glass cases on the wall outside. There are markets here and there, and little Vespa vans parked on street corners selling fruit and vegetables.

We were on a mission to find the best arancini, crispy rice balls with a gloopy texture flavoured with all manner of things from ragu to pistachios. Jon brought us to Savia restaurant, an institution in Catania, opposite the Botanic Gardens. Long polished glass cases piled high with Sicilian pastries, marzipan fruits, cannoli, nougat.....

At the other end there was a classic Sicilian tavola caldo with a selection of arancini in a variety of shapes, the classic were round and as large as my fist, arancini with ragu are cone shaped, spinach arancini are also round but are easy to distinguish because they are green. Catanese with aubergine are oval....... 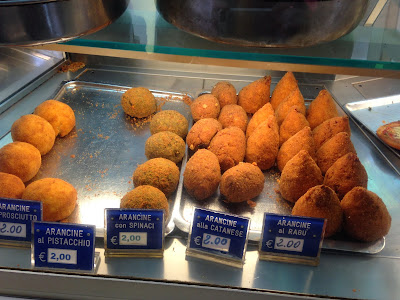 We ordered a selection of three and a faggotini, a tender bread parcel stuffed with aubergine, tomato and cheese. The arancini are really substantial and filling, and are eaten out of your hand wrapped in a napkin. 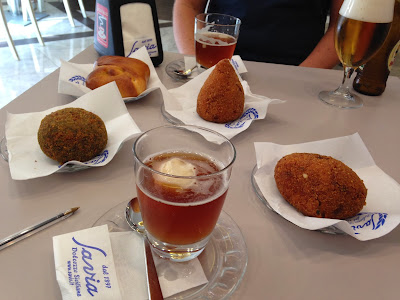 The drink of choice seemed to be iced tea with a dollop of lemon granita so I had one of those and loved it. I couldn't decide which of the arancini was my favourite, they were all good, but I think maybe the spinach. We certainly didn't need a dessert but decided to order a  coffee and almond granita, all in the way of research! 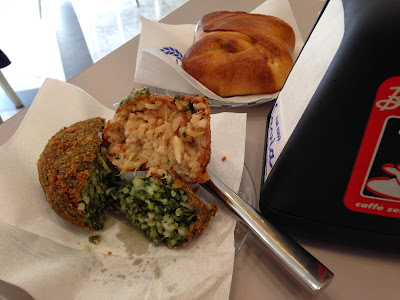 Water ices are an excellent way to round off a robust meal, in Sicily the texture tends to be smoother and less granular than  one expects a granita to be. Granita is also the breakfast of choice for many Sicilians with a soft bun: a perfect start to a sizzling hot day.