Why We Should Eat Less Meat

Former President of Ireland, Mary Robinson, really put the ‘cat among the pigeons’ recently when she called on people from developed nations to consider eating “less meat or no meat at all”, due to the toll its production takes on the environment.  Her address to 1,300 current and future young world leaders from 196 nations at the One Young World Summit in Ottawa caused quite a stir around the world but particularly here in Ireland.


The remarks drew a tirade of condemnation from several farming organisations and rural TDs, who seemed to assume this statement was aimed directly at them.
Irish beef farmers are understandably particularly sensitive having been directly affected by the fall in the value of sterling as a result of Brexit.
Because of the quantity of methane and slurry produced by animals, livestock rearing is seen as a major contribution to greenhouse gases. However, here in Ireland our dairy and beef animals are primarily, though not completely, grass fed so consequently they produce much less gas than grain fed animals reared in intensive feed lot systems. A fact that needs to be repeated loud and clear… We are not comparing like with like, it’s simply not the same thing.


Ireland can grow grass like virtually nowhere else in the world so surely it makes sense for our farmers to produce good beef for export to areas that are not so favoured by nature. The quality of Irish beef is highly esteemed. It was served recently at the Breeder’s Cup in California on the invitation of the organisers. Good Food Ireland was partnered by Dawn Meats and Bord Bia to showcase Irish beef at this super high profile event considered to be the ‘richest two days in sport’
However, back to Mary Robinson, we must be careful not to ‘shoot the messenger’. There’s no doubt that many people nowadays eat far more meat than is beneficial for their health.
Much of that meat is produced in extremely intensive units which raise both animal welfare and chemical input concerns.


Although I eat mostly plants, copious amounts of vegetables, fresh herbs and wild foods, I’m certainly not a vegetarian. I love good meat but increasingly find myself eating less meat but better quality totally free range and organic. I am happy to pay more to those who are rearing animals and poultry in a more extensive way.
We urgently need a system where food producers can be identified and rewarded for producing a superior product. We also need to create a new paradigm where the contribution of organic and chemical free farmers to the environment is acknowledged in tax breaks.
So Mary Robinson would like us to consider a vegetarian or vegan lifestyle for the sake of the planet and future generations. Scientists have confirmed that a widespread change in our eating habits would cut food related emissions by two thirds. However many are reluctant to forego meat altogether. 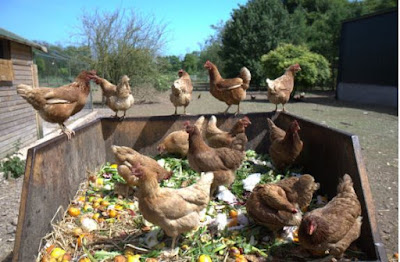 Nonetheless, we can’t ignore the validity of the arguments so why not seek out an organic chicken. It will cost you €18-€22 as opposed to €3.50 – Ouch… and that’s if you can even find one.  That is the real price of rearing and feeding a chicken with organic GM free feed for approximately three times the length of the bargain chicken without antibiotics, hormones, growth promoters or anti-depressants. Organic always means free range but free range certainly does not mean organic. Free range is a very ‘elastic term’, so ask some questions…
So back to the days when chicken was a ‘once a week’ or even once a month treat and every single scrap was used, liver for pâté, giblets, carcass and feet for a fine pot of stock soup or broth – there’s nothing more nourishing or restorative particularly if you are feeling slightly poorly – it’s not called ‘Jewish penicillin’ for nothing.
Pork, too needs careful sourcing to find organic or chemical free.  Close to us here in East Cork, we have Woodside Farm where Martin and Noreen Conroy and their family work hard to provide us with beautiful heritage breed Saddleback pork and bacon, only problem they simply can’t keep up with demand – catch up with them in County Cork at Midleton and Douglas on Saturday, Mahon on Thursday and Wilton Farmers Markets on Tuesday.
In Curraghchase in County Limerick, Caroline Rigney and her husband Joe also produce exceptional pork at Rigney's Farm.
Mary’s right in many ways. We have to change; we simply cannot go on with ‘business as usual’. For the sake of our children, great grandchildren and the planet, we all need to commit to the Paris Agreement. Each and every one of us needs to think about our carbon footprint – we can each make a vital difference.

This is one of the reasons that we have chosen to focus on "Responsibility" as our Symposium theme at LitFest this year. We have gathered a tremendous range of journalists, chefs and food producers to discuss all aspects of the topic from 19th-21st May, see my last post for a round up of some of the exciting speakers we have in store for you. Visit the LitFest website to book.
Posted by Darina at 14:32