I’m driving through rural Rajasthan, a world apart from well-known Golden Triangle of Jodpur, Jaipur and Udaipur. The fields are a patchwork of crops: wheat, sesame, mustard grown for both oil and seeds…

Here and there, bananas and tamarind trees and occasionally a huge banyan tree. Shepherds with long walking sticks, tend their flocks of sheep and goats, now and then a camel cart laden with anything from fodder to huge slabs of sandstone from the local quarries. 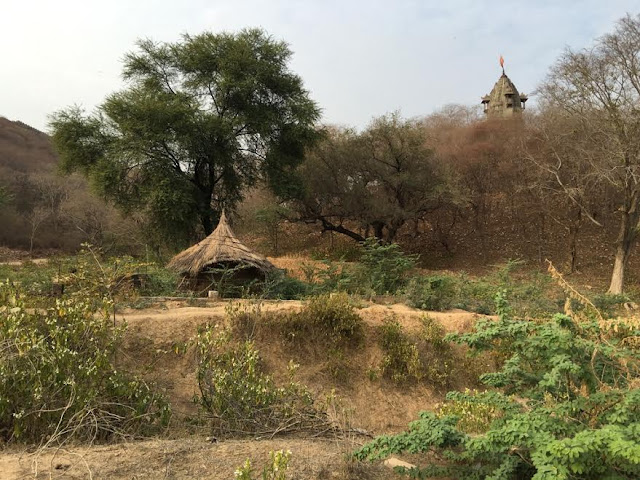 Women in bright saris are working in the fields, pulling weeds or harvesting and occasionally by the roadside carrying broken rocks in tin bowls on their heads, men supervise... 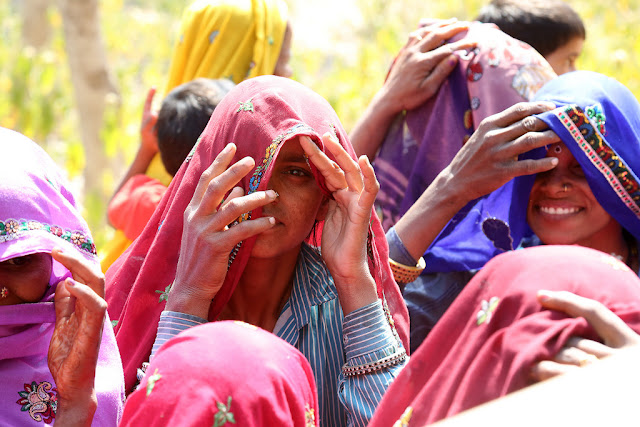 There’s virtually never a time when there aren’t people in sight. Lots of little villages bustling with life, a ramshackle and mesmerising mix of stark new build cement cubes and crumbling traditional houses, often a mixture of both. 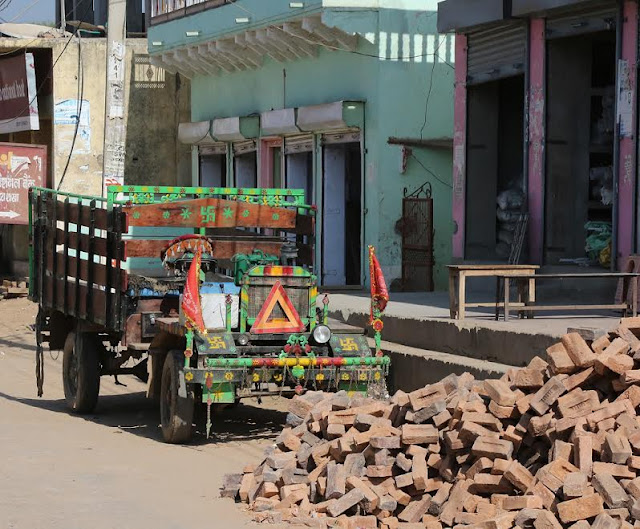 The electricity is a mélange of wiring that would put the heart 'cross wise' in a health and safety officer, yet it all seems to work. Lots of tiny shops, selling everything and anything. Street carts piled high with fruit and vegetables. Others sitting on the roadside with just a few little chillies, aubergines, maybe a few beans to sell. 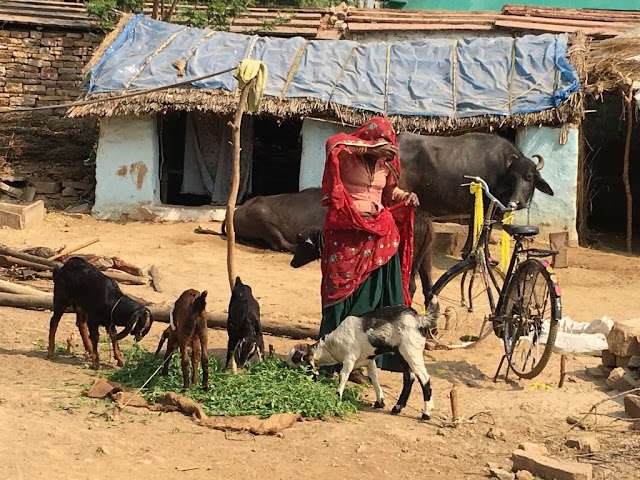 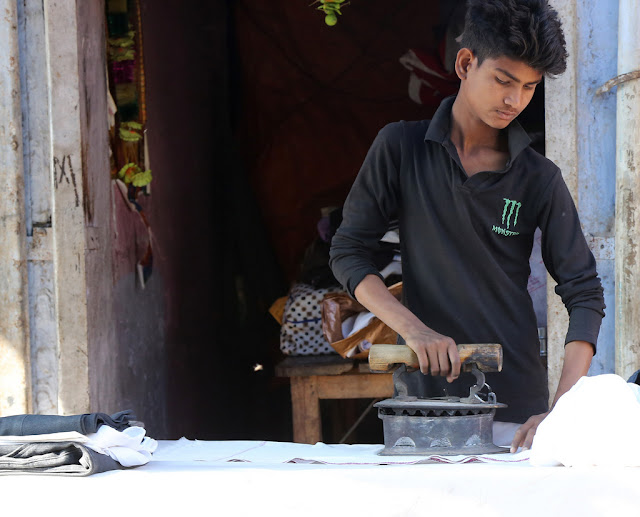 In the tin area, craftsmen are turning out huge metal trunks for dowries.  Virtually all the signs are in Hindu, cows nonchalantly ramble through the streets confident that no one will harm them,  the cow is sacred and revered in India. 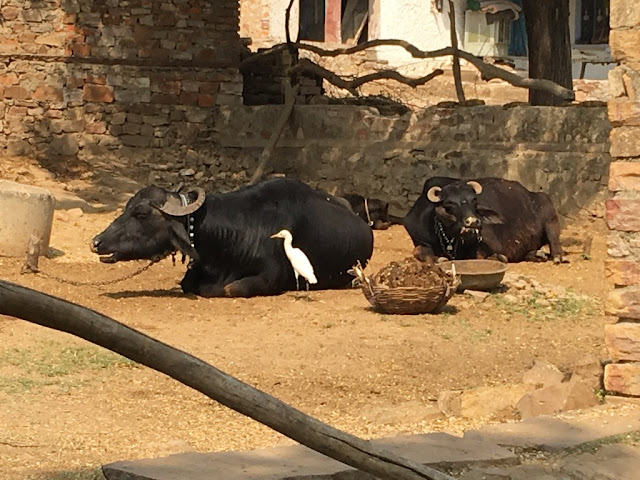 In the little villages everywhere the children wave and cheer when they see us ‘take my photo’, ‘take my photo’. I’ve never known an area where people were more welcoming or friendlier, no one asks for rupees or a peno! 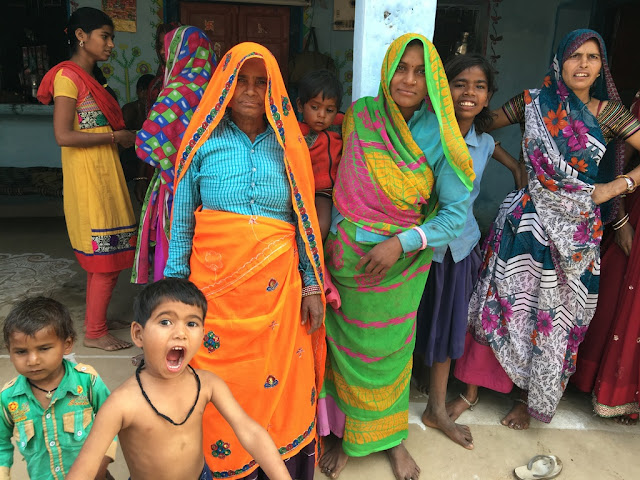 Men, sip tea in the Chai shops, katori, bright orange jalabas and samosas are piled high for sale in open air dhaba’s . There are sweetmeat shops, Indians have an incredibly sweet tooth and also love their snacks. So lots of shops sell just bags of crisps, namkeen and lotto tickets. 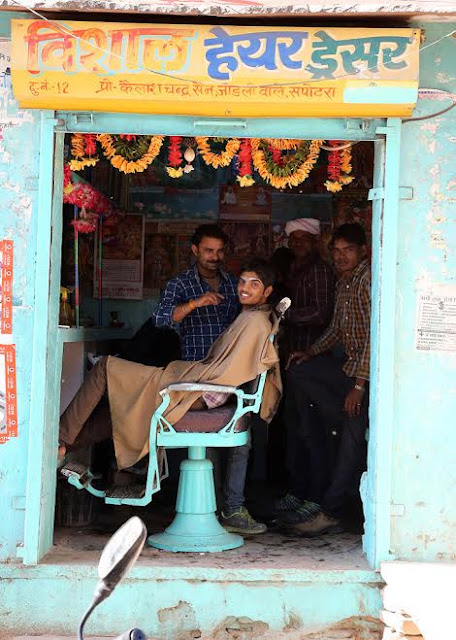 Hairy, scrawny pigs and chickens snuffle amid the garbage and there are lots of stray dogs. Out in the countryside the bird-life is astonishing, white egrets and mina birds walk along the buffalo’s back picking off ticks. Cow pats dry on walls and rooftops, fuel for the little clay or outdoor stoves over which most people cook their food. A totally holistic and sustainable system. 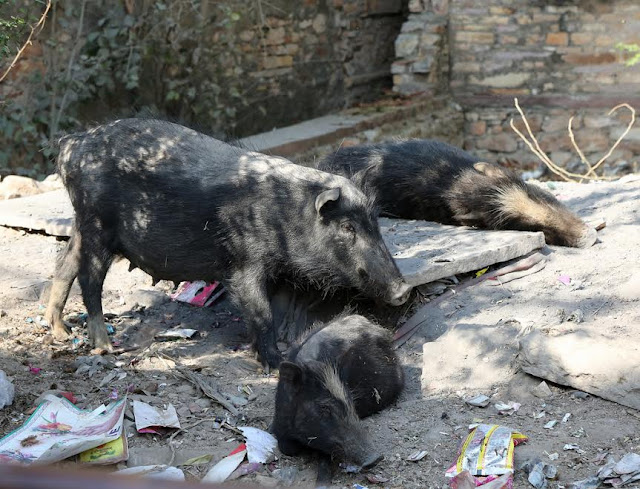 Here in rural Rajasthan many women, partially cover their faces with their saris, older men still wear a colourful turban  and sport an impressive moustache. The houses are colour washed, blue, ochre, pink or plain. There are a few jeeps gaily painted, colourful lorries, lots of richly decorated homemade tractors with no cab or cover on the engine (something to do with tax) and of course countless bikes and motorbikes with three and often four people riding on top including a sari clad lady sitting side saddle. 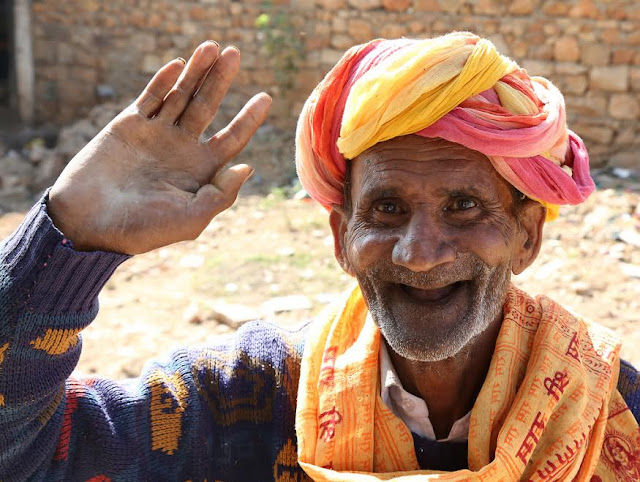 We’re on our way to Ramathra Fort in the Karauli district – it’s a four hour drive from Jaipur airport along a mixture of roads, tiny bursts of motorway an occasional dual carriageway but mostly potholed roads, dirt tracks with numerous ramps. After 4½ hours we turn up a steep stony roadway and at last we are there...... This gives new meaning to the words ‘off the beaten track’. It’s an endurance test to get here but what an oasis… 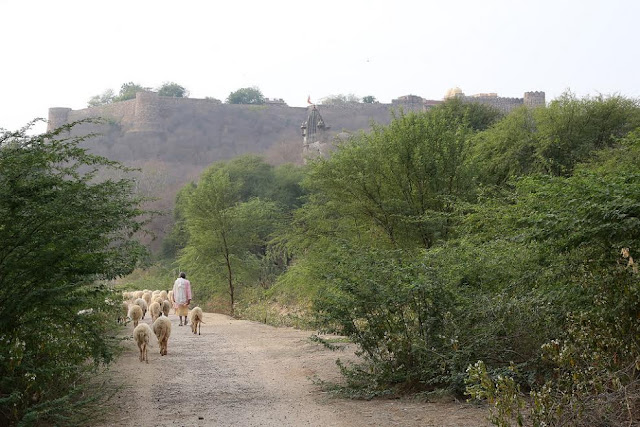 A 17th century fort still owned  by descendants of the original Maharaja of Karauli who built the structure in the 1700’s and the family have been here for over a 1,000 years. Rajasthan was never conquered by the British. It has now been restored and opened as a heritage hotel by the Thakur Brijendra Raj Pal family with just 6 suites and 6 luxury Rajasthani tents.  There's a 365 degree view over Rajasthan from the 80 ft ramparts. Below us the Kalisil Lake and dam and the forts, organic gardens owned by Brijendra Rajpal who invested the hard earned profits from her carpet business in Jaipur into restoring the fort from an advanced state of dereliction. 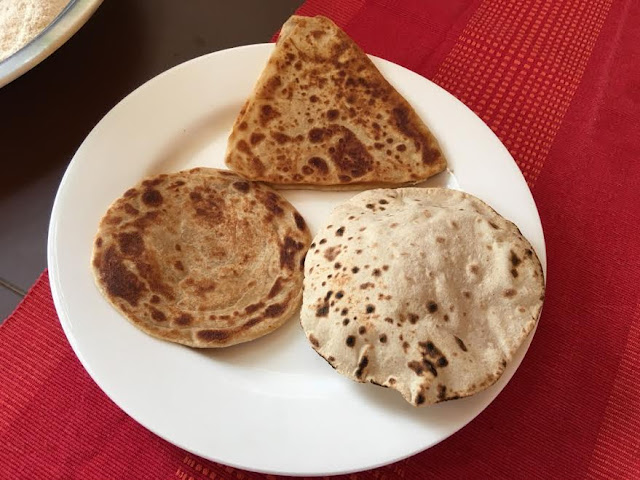 The food is delicious here. Virtually everything is produced on the farm or in the local area. They grow and mill the wheat for the chapatti, paratha and poori . The mustard oil is made from mustard grown in their own fields, the yoghurt from the milk of the buffaloes whose manure is used to activate the compost to enrich the soil for the organic gardens.

No swimming pool but an unheated Jacuzzi on one of the turrets with a staggering view of the local countryside, possibly the best in the whole of India. The fort has been restored using traditional building techniques and local craftsmen. We had a memorable boat trip on Kalisil Lake before sunset. It’s on the fly path to Bharapter, a rich feeding ground for ducks, storks, cormorants, kingfishers, sarus, cranes, stilts and herons. The lake was formed over 50 years ago when the Kalisil river was damned for an irrigation scheme that now benefits local farmers in Rawathara and neighbouring villages along the canal. The lake is fed by monsoon rains and when full spreads over 17 km,  all the way to the Holy City of Kailaden.

A walk through the local village, Ramathra was quite simply enchanting, the villagers are so friendly and welcoming and curious. They welcomed us into their houses and invited me to dance with them to celebrate a recent wedding. 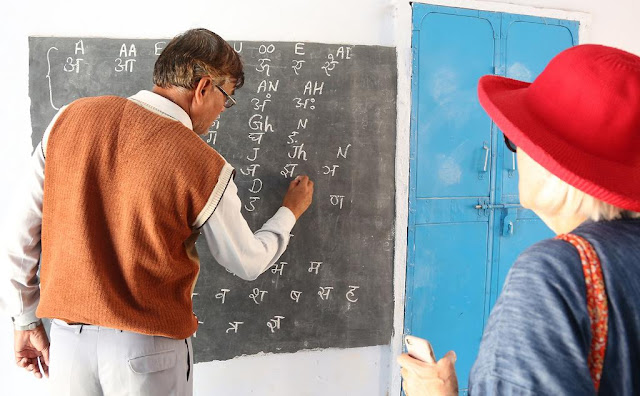 In the local school, the teaches were eager to show us around and one me an impromptu Hindu lesson.

The big bonus for me was the food. It was particularly delicious here and guests can learn how to prepare any of the dishes on the menu. I had two cooking classes with the owner Geetanguli and her shy and brilliant chef.  At Ramathra Fort they make all their own chutneys and pickles and the best lime pickle I have ever eaten. He showed me how to make this fascinating smoked Ramathra chicken curry and raita, home made paneer, several Indian flat breads, paratta  and particular fascinating local bread called Batia.  Ovens are rare in Indian homes, even in the more affluent homes of people so in villages all cooking is done over an open fire on a clay or in more affluent homes in the urban kitchens on gas rings. For over 60% of people in India, the fuel of choice is still dried ‘cow pats’  and despite our understandable initial surprise it doesn’t smell and is totally sustainable. Ramatha Fort is quite a find – particularly for the more adventurous traveller – I long to return…