It came as quite a surprise to many to discover that one of the several ‘hats’ I wear is Honorary Council General for Sri Lanka to Ireland!

The 3,000 plus Sri Lankan community in Ireland are of course aware but it wasn’t until the tragic events in late April when I attended mass in the St Mary’s Pro Cathedral, celebrated by Archbishop Martin for the victims of the massacre that my connection became more public.
I accepted the honorary role in November 2017 on the invitation of Prime Minister Ranil Wickremesinghe who visited Ireland and Ballymaloe Cookery School over Christmas period in 2015.


I’ve visited Sri Lanka many times, an astoundingly beautiful country, lush, green and fertile with delicious food and warm and friendly people who have endured  many years of turbulence but had recently become accustomed to a more peaceful era.
Sri Lankan tea is some of the finest in the world. I’ve visited the tea plantations and seen at first hand the care and dedication that is involved, from the hand picking of the ‘tips’ of the Camellia Sinensis, tea bush to the drying, withering, grading…

It is important that the Sri Lankan tea industry remains glyphosate free at a time when there is a growing concern worldwide among scientists and the general public about the toxic effects of pesticides.
True cinnamon is native to the lush tropical forests of southern Sri Lanka. The gentle coastal hills are especially suited to the growth of cinnamon. Wars have been fought over this spice. In 1505 the Portuguese sailed to that part of the world in search of cinnamon so they could cut out the Arab middlemen. In those days it was gathered from wild trees but when the Dutch succeeded the Portuguese the first plantations were sown and cinnamon has been flourishing ever since.


On my last trip to Sri Lanka I wanted to see the process of cinnamon production for myself so I visited Mirissa Hills, a working cinnamon estate with 360 degree views over Weligama Bay. Thilak the general manager, showed us around the estate which grows both cinnamon and galangal and explained the whole process. On our way to the plantation we passed the little temple to Pathini, The Buddhist God of cinnamon. The air was filled with the scent of cinnamon.
The cinnamon is still harvested and peeled in the same time honoured way by the skilled Salagama caste. It cannot be mechanised and the process has survived virtually unchanged since ancient times.
The cinnamon peelers go into the fields early in the morning. They choose twigs about 5 feet long and about 1 ½ inches thick -  straighter are easier to peel.  Shoots or leaves are trimmed with a sharp curved machete.

The skill has been passed down from generation to generation over the centuries. The peelers sit cross legged on hessian sacks on the floor in the peeling shed with their bundle of cinnamon sticks by their side. They need just three tools, a curved peeler, a brass rod and a small sharp knife called a kokaththa.
First the outer dark leathery layer is shaved off; this is returned to the cinnamon fields for compost.
When the peelers have several layers of precious inner bark they carefully layer them inside each other, over lapping to create a four foot quill.

These are carefully laid on strings of coconut coir hanging beneath the tin roof. It takes eight days, away from sunlight for them to curl and dry. They will then be rolled tightly, and allowed to dry for a further ten days. The cinnamon ‘quills’ are then tied into large bundles to sell in the market where they will be precisely cut into the cinnamon sticks we know.
Real cinnamon is known to be a natural ‘cholesterol buster’, unlike it’s inferior and cheaper relation cassia, which is often passed off as cinnamon.
How to know the difference….true cinnamon comes from the thin pliable bark of the Cinnamomum Verum trees. This cinnamon is softer, flakier and paler than cassia which too has it’s place but the flavour is more acrid than sweet, gentle and aromatic. This is the Sri Lankan cinnamon, which I use at Ballymaloe Cookery School,  perfumes for both sweet and savoury dishes. 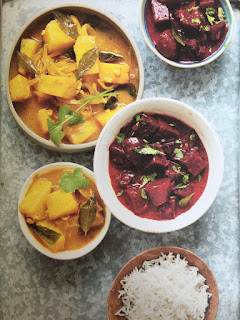 Hard quills or ‘bark like’ pieces are more likely to be cassia so save those for vegetarian curries if you don’t have true cinnamon. Always try to buy cinnamon whole and grind it yourself, ready ground cinnamon is regularly cut with the less expensive cassia. So it’s darker in colour and has a more aggressive flavour. I’ve had many questions about Sri Lankan food, is it similar to Indian food, hotter, spicier…? In fact it is a wonderful melange of Indian, Indonesian and Dutch flavours reflecting the countries history as a spice producer and trading post over several centuries.