This evening we had compote of gooseberries with elderflower after supper with a few friends, a simple dessert, just stewed gooseberries really but it blew everyone away. Most of our friends hadn’t tasted gooseberries for years – they had virtually forgotten about them. 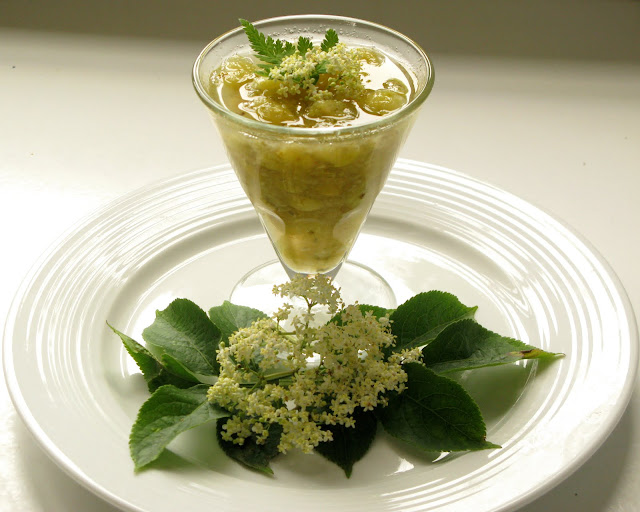 The intense flavour sent them into a spin of nostalgia many called them Goosegogs when they were children. They reminisced about the gooseberry bushes in Granny’s garden, picking gooseberries from the prickly bushes, top and tailing them around the kitchen table for gooseberry jam, and the dire warnings not to eat them before they were ripe or “you’d get a pain where you never had a window”.

Wonderful how a flavour brings memories flooding back, one mouthful and I was back in our little vegetable garden in Cullohill, picking tart green berries into an enamel bowl, so hard they sounded like stones against the side of the bowl. Mummy usually made red gooseberry jam from the riper fruit, but years later I discovered the magic of green gooseberry and elderflower jam from Jane Grigson’s Good Things cookbook published in 1971.
She also introduced me to the magical combination of green gooseberry and elderflower. Ever since, as soon as I see elderflower blossoms in the hedgerows, I know it’s time to dash down the garden to rummage through the prickly branches of the gooseberry bushes to pick the hard, green, bitter, marble-sized berries.
It’s difficult to imagine that they are ready to eat but believe me they make the best jams and compotes at this stage and also freeze brilliantly.
If you don’t have a gooseberry bush in your garden, dash out and buy at least one now, better still three, at least one should be Careless, Invicta is another delicious variety which is somewhat resistant to mildew.
Unless you live close to a good Country or Farmers Market you are not likely to find fresh gooseberries. Unlike strawberries and raspberries which are available ad nauseam all year round, fresh gooseberries are rarely to be found on a supermarket shelf.
We grow several varieties of gooseberries; some in bush form. We train others as cordons or in a fan shape along a wall. The latter are a brilliant discovery, so much easier to pick. Gooseberries are deciduous and the fruit is high in Vitamin C.
Only today, I discovered the origin of the word gooseberry or spíonán in Irish, apparently they were so named because they were used to make a sauce for roast goose to cut the richness – Can you imagine how delicious that combination would be?
Posted by Darina at 13:55