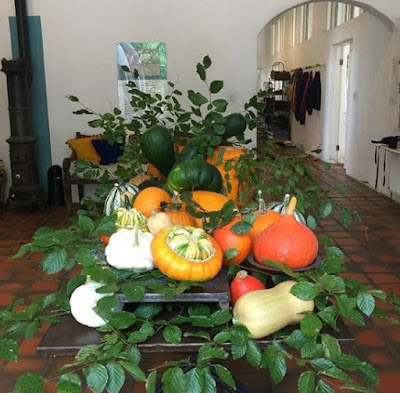 We’re all set for Halloween, squash, pumpkins and gourds of every size, shape and colour are piled precariously on the cookery school table tops, window ledges, in baskets and boxes, they look so beautiful. It has become a bit of a tradition now for children from the local schools to come to the farm to harvest the squash and pumpkin every Autumn. They have the best fun and are intrigued by the names, Hubbard,  Turks Turban, Little Gem, Delicata, Hokkaido, Crown Prince, Kobocha,  Cocozelle, Jack be Little, Red Kuri… Some are the size of a child’s fist, others so enormous that is takes two sturdy lads to carry them.

Everyone loves carving the pumpkins into scary faces for Halloween, the festival that apparently originated in Ireland over three thousand years ago when the pagan festival of Samhain  marked the end of the Celtic year and the beginning of the new year, the natural transition from lighter Summer to the darker Winter. At this time of the year it was believed that the division between this world and the other world was at its most fragile, allowing spirits to pass though. So as in the Mexican tradition of the ‘Day of the Dead ‘the spirits of the ancestors were invited back home and evil spirits were warded off. Bonfires, food, costumes and masks were all part of the festivities.
After the famine, the Irish carried their Halloween traditions to America where it is now one of the major holidays of the year. Similarly, here in Ireland where it is fast becoming as big as Christmas.  For several weeks now children have been whipped into a lather of excitement by all the Halloween temptations on TV and in the shops and the anticipation of dressing up as ghouls and witches to do the rounds of their neighbourhood for the annual ‘trick or treat’. 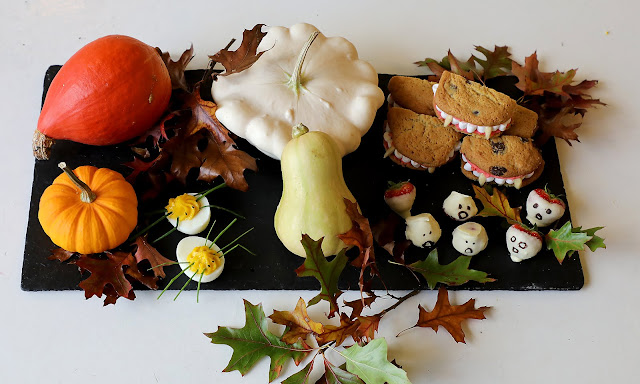 You may be amused to hear that we were inadvertently removed from the ‘must visit’ list a number of years ago when word spread among the ‘trick or treaters’ that Ballymaloe Cookery School was no good because you only got fruit and nuts.
The fact that they were home-grown apples and fresh hazelnuts, cobnuts and walnuts from the nut garden did not remotely impress the scary little dotes who were hoping for proper sugar laden treats. So I think we’ve been black-listed! 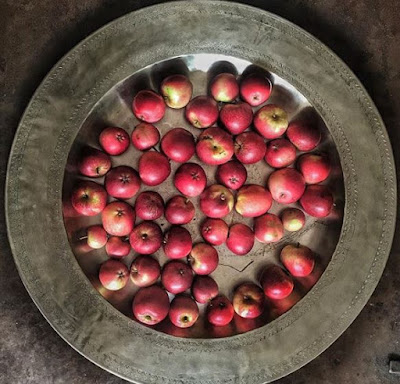 The spider web cup-cakes did actually impress as did the ‘spooky puca’ meringues but they were scarcely worth the effort of schlepping up the long avenue for.
Posted by Darina at 06:00